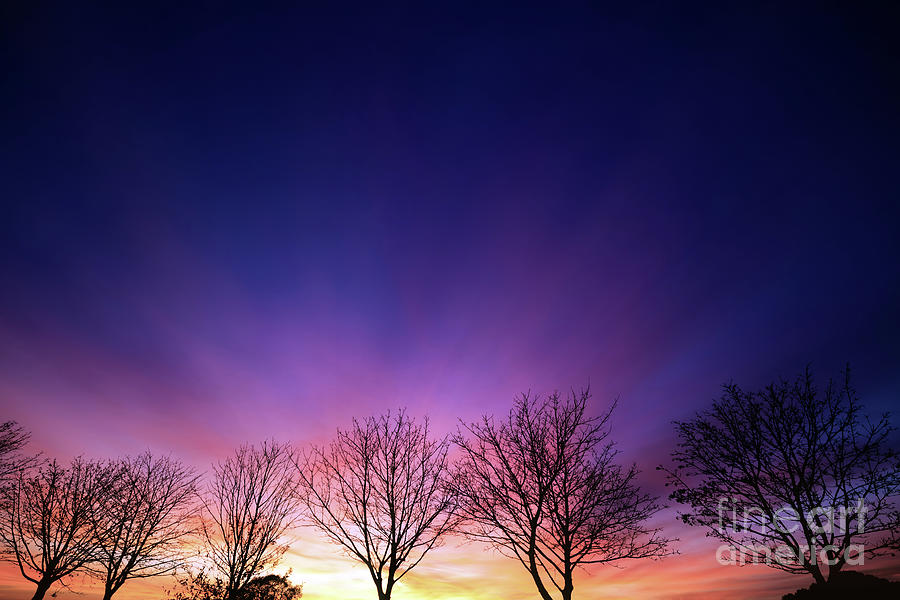 Stunning winter sunset with bare tree silhouettes. Vibrant skies and clouds filled with orange, red and purple colors making the sky look like its on fire.
We get colours like these mostly in late autumn and winter. Norfolk has 'big skies' thanks to the generally lowish lying area and lack of large built up areas. This view is very close to where I live which is fortunate in the winter as it very cold. Winter skies are usually better that summer skies.

It�s often said that a spectacular dawn or dusk is brought about by particles within the atmosphere, usually through manmade pollutants or naturally occurring dust. However, this is in fact a myth with pollutants generally having the opposite effect on sunsets and sunrises. One of the ingredients that helps produce such bright colours in the sky as the sun sets and rises is clean air.

The sun�s rays are made up from a spectrum of colours ranging from violet through to red, with each colour having a slightly different wavelength. Air molecules scatter sunlight as it travels through the atmosphere, and explains why the sky appears blue during the day (the blue and violet part of visible light is scattered by air molecules more than other colours in the spectrum, due to its wavelength, and thus dominates over the other colours). When the sun is lower in the sky, around sunrise and sunset, the light must pass through more atmosphere. With more atmosphere for the light to travel through, there is more scattering of the blue light, so much so, that the reds and oranges of the spectrum begin to dominate and reach us at the surface.

This briefly explains why sometimes the blues are replaced by reds and oranges at the start or end of the day but as we know, some sunsets and rises appear more vibrant than others. This is more often-than-not down to what cloud happens to be in the sky at the time.

For those vivid reds to occur, high level clouds usually play an important role. These types of cloud, such as cirrus, receive the sun�s light with little interference from dust and pollutants, which, as already mentioned, tend to dampen the bright reds and oranges. Ice crystals within the cloud scatter and reflect the red light, causing the sky to glow, like it were on fire.

The saying �red sky at night, shepherd�s delight. Red sky in the morning, shepherd�s warning� was first recorded in the Bible and was a way to help shepherds predict what the weather was likely to turn out like over the coming day or night. The saying may bear some truth, in those locations where weather systems generally move in from the west, such as the UK. With the sun setting generally in the west, a red sky supposedly implies that skies are clear and pressure is generally building, which often gives dry and settled conditions. In contrast, a red sky in the morning can imply that the sun, coming up in the east, is shining its red glow on to clouds in the western sky. Cloud in the west would suggest the approach of a frontal system and poor weather on its way.

Thanks to weathercast.co.uk for that explaination.

Hi Judy, thanks for taking the time to leave a comment.

Hi Teri, thank you for your comments. Nature is amazing isn't it.

Hi Steve, thank you for your comments

Hi Linda, thank you for your comments

Beautiful colors in that sky!

Hi Belinda, thank you for your comments

Hi Phyllis, thank you for your comments

Hi Mim, thank you for your comments

Hi Randy, thanks for your comments

Hi Allen, thanks very much

Thanks for the comments Sharon

Hi Tonia, thanks very much